One of the most frequent sleep-related respiratory diseases is obstructive sleep apnea (OSA). OSA usually causes people to wake up gasping for breath or choking. Sleep disorders like narcolepsy can lead to increased daytime tiredness despite the fact that these episodes typically last no more than 30 seconds at the most

For people at risk for OSA, some doctors and researchers have tested the Mallampati score. Using a 1 to 4 scale, the Mallampati score estimates how difficult it will be to intubate a particular patient based on their tongue and esophageal airway size and shape. Mallampati score may be an accurate indication of OSA in children, and may help prioritize individuals for a sleep study and/or sleep medicine referral. Other research has shown mixed outcomes.

What Is Obstructive Sleep Apnea?

It is common for people to wake up during the night due to a condition known as obstructive sleep apnea (OSA), which occurs when a person’s breathing is disrupted while they sleep. There are physical obstructions that block the breathing passageways and reduce the amount of air that can travel through, which is what causes OSA. An larger tongue or tonsils, a retracted lower jaw, or a relatively thick neck circumference are some of the possible anatomic reasons of this blockage. Central sleep apnea (CSA), on the other hand, happens when the brain and muscles that allow breathing are unable to communicate. 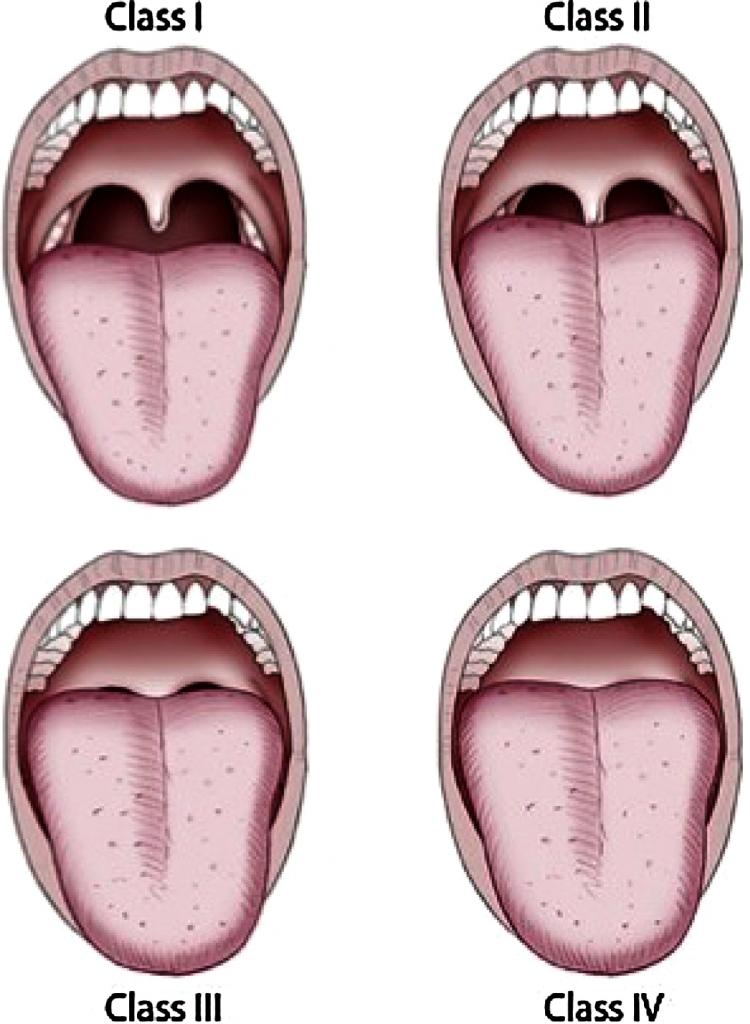 OSA affects 2% to 9% of individuals, with the majority of cases going undiagnosed. OSA severity is often assessed by a method called apnea-hypopnea index (AHI), however this has drawbacks. “Apnea” refers to a total cessation of breathing, whereas “hypopnea” refers to a partial collapse of the airway but not a complete cessation of breathing. The number of apnea and/or hypopnea episodes per hour of sleep is used by the AHI to divide OSA into three severity levels: mild, moderate, and severe.

When assessing the severity of OSA, doctors will look at additional factors. It is common practice to evaluate body mass index (BMI) because obesity is a strong risk factor for Obstructive Sleep Apnea. Obesity is defined as a body mass index (BMI) of 30 or higher. Snoring and excessive daytime sleepiness are also taken into consideration by doctors. In spite of polysomnography being the gold standard for diagnosing, classifying, and monitoring OSA (sleep study), it has a few drawbacks. Since then, the AHI has served as a main indicator of OSA severity.

What is the Mallampati Score?

The Mallampati score was introduced in 1985 and is used to identify people at risk for difficult intubation. Based on the following criteria, the most recent version of this score is a 1 to 4 scale:

The patient sits with their mouth open and their head in a neutral position while this test is being performed. An increased risk of intubation is associated with a higher Mallampati score, which is widely used to identify people at risk of OSA because of the link between it and OSA.

According to a number of studies, Mallampati rating does not accurately predict OSA. One study found a substantial connection between the Mallampati score, the AHI, and the size of a child’s tonsils in children. For children with OSA and those without it, this study found conclusive results.

According to other studies, the Mallampati scoring system is an unreliable tool for assessing OSA symptoms. Mallampati scale and AHI correlations have been validated in another study; nevertheless, there was no variation in AHI amongst Mallampati classes. The combination of BMI, gender, and age was a better predictor of AHI in this research of adult patients than the Mallampati scoring.

A third study found that the Mallampati score can be used before polysomnography sleep tests, but that it has limitations as a diagnostic evaluation. One point on the Mallampati scale increases a patient’s risk of developing OSA by more than two-and-a-half times. Even though a Mallampati assessment is non-invasive, the authors of the study acknowledge that this test is less beneficial for evaluating patients with moderate OSA symptoms, even though the score might be used during physical examinations

To be clear, the AHI rating is not without its critics. AHI is criticized by some research because it only considers the number of apneas and hypopneas that occur per hour of sleep, rather than the length of each episode, which is seen to be a bigger danger to the patient’s overall health. Patients with the same AHI score do not necessarily share the same severity of OSA symptoms because of other characteristics such as age and daytime symptoms, so AHI may not be totally trustworthy. 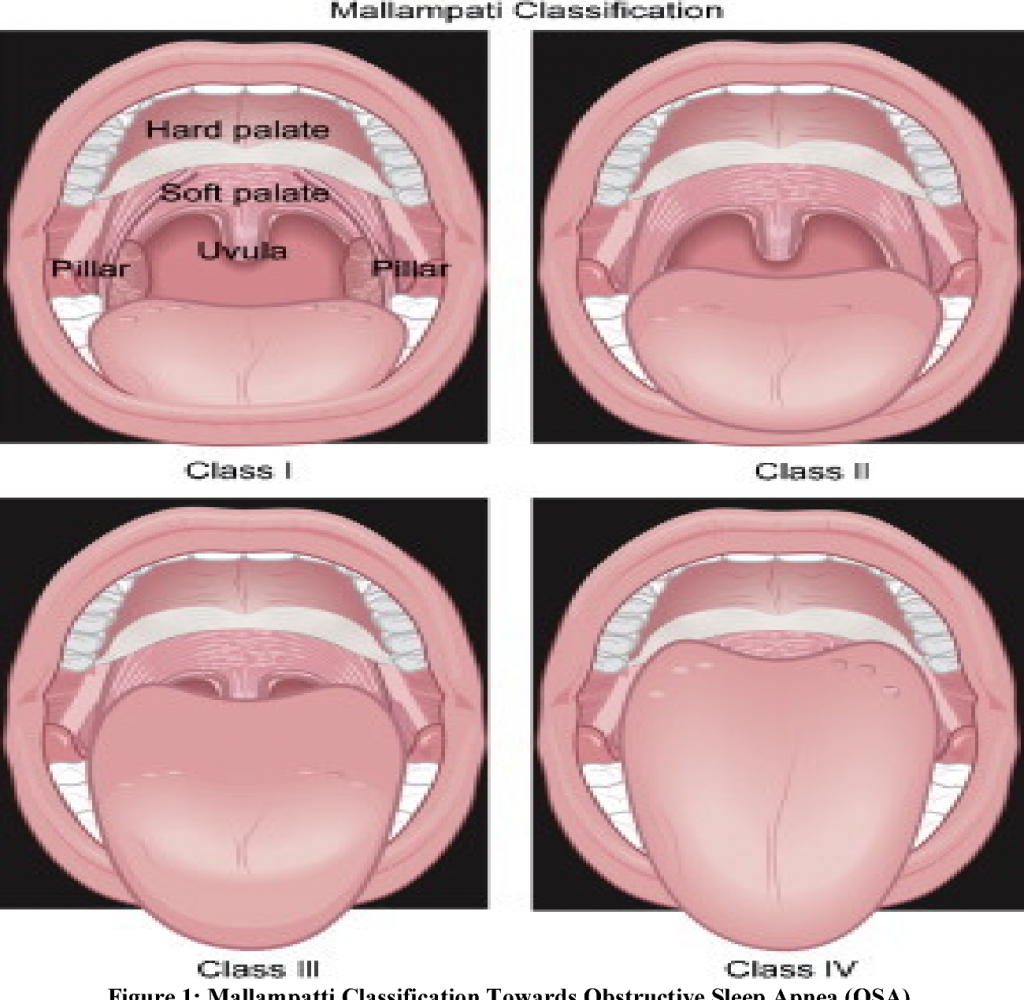 The following are symptoms of obstructive sleep apnea in children:

However, an overnight polysomnographic test in a sleep laboratory is required to definitively confirm whether or not your child has obstructive sleep apnea. Patients’ sleep patterns will be monitored, their oxygen desaturation levels will be assessed, an electrooculogram and an electrocardiogram will be performed, their airflow through their noses and mouths will be measured, and their chest and abdominal wall motions will be observed, among other things.

End-tidal carbon dioxide (ET CO2) values greater than 50 mm Hg for more than 9 percent of sleep time, or a peak level greater than 53 mm Hg, are anomalies in pediatric sleep apnea (CPAP) in this age range.

Consult with Airway and Sleep Group for a diagnosis if you suspect that your child has sleep apnea. We’re here to assist you.

Dr. Hirschinger will examine your mouth during the initial exam in his Beverly Hills office to determine if you have obstructive sleep apnea. One of the things he’s looking at is your airway’s opening. It’s also done by anesthesiologists before any procedure that requires intubation to add or withdraw fluids from your stomach during surgery. Certain structures in your mouth can restrict or constrict your airway when you open it. The following are some examples of these types of structures:

Because there is no bone in the soft palate, it is called such. Because it contains bone, the region immediately before the soft palate is referred to as the hard palate. During swallowing, the soft palate serves to shut the nasal passages.

When it comes to taste, the tongue is the most important organ.

Tonsils – Tonsillitis is an infection of the lymphoid tissue in the tonsils, which can lead to their enlargement. The airway becomes smaller as they enlarge, making it more difficult to breathe through the mouth.

It is the little portion of tissue that hangs from the border of the soft palate, which translates to “little grape” in Latin. 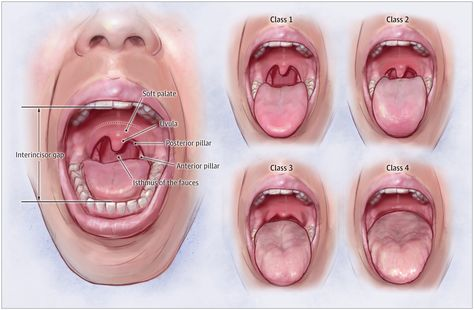 Mallampati I is given when the uvula can be seen at its base when looking inside with the tongue extended.

We score Mallampati II if the tongue partially covers the uvula when we peek inside with the tongue extended.

We score Mallampati III if the tongue covers most but not all of the uvula when we look inside with the tongue extended.

When we check inside with the tongue extended, if the tongue completely covers the uvula, we give that a Mallampati IV because the airway is extremely blocked.