Alcohol is a depressant for the central nervous system, slowing down brain function. The sedative effects of alcohol can create feelings of relaxation and tiredness, however excessive drinking has been associated with poor sleep quality and duration. Insomnia is a typical symptom in people with alcohol use disorders. Alcohol use has been linked to a worsening of sleep apnea symptoms, according to research.

While moderate alcohol consumption is generally regarded as safe, each person’s reaction to alcohol is unique. As a result, the effects of alcohol on sleep vary widely from person to person.

How Does Alcohol Affect Sleep?

In the stomach and small intestine, alcoholic beverages are absorbed into the bloodstream of those who drink them. Alcohol is eventually broken down by enzymes in the liver, but this process takes a long time, allowing excess alcohol to circulate throughout the body. Alcohol’s effects are highly individualistic. One must also take into consideration a person’s gender, body type, and age when determining their level of intoxication. 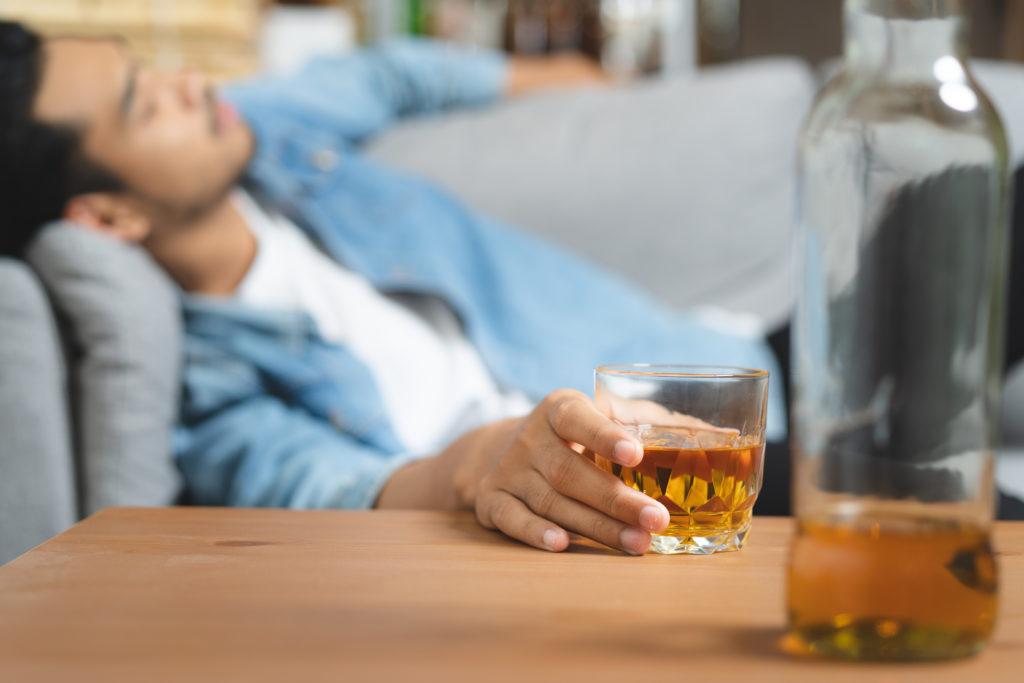 Alcohol and sleep have been studied extensively since the 1930s, yet many facets of this link remain a mystery to this day. People who consume a lot of alcohol before going to bed are more likely to have a delayed sleep onset, which means they have to wait longer before they can fall asleep. These people are more prone to experience sleep disturbances and decreased sleep quality as their liver enzymes digest the alcohol during the night and their blood alcohol level declines.

Throughout the night, these four NREM and REM stages are repeated in a cyclical pattern. For every eight hours of sleep, there should be four to five cycles of 90-120 minutes each. NREM slow-wave sleep dominates for the first few cycles, while REM sleep normally lasts no more than 10 minutes at a time. Later cycles will see the roles reversed, with REM taking over and lasting up to 40 minutes or more. NREM sleep will virtually disappear during these cycles.

The first two cycles of REM sleep are more likely to be disrupted if a person consumes alcohol before going to sleep. People who drink alcohol tend to have a faster start of sleep and deeper sleep since alcohol is a sedative. There may be an imbalance between slow-wave and REM sleep as the night passes, leading to less slow-wave sleep and more REM sleep. As a result, sleep quality is reduced, which can lead to shorter sleep duration and more frequent interruptions.

When it comes to the most prevalent sleep issue, insomnia, it is characterized as “a persistent difficulty with sleep initiation; duration; consolidation or quality.” Sleep deprivation, excessive daytime tiredness, and other unpleasant consequences are all symptoms of insomnia. 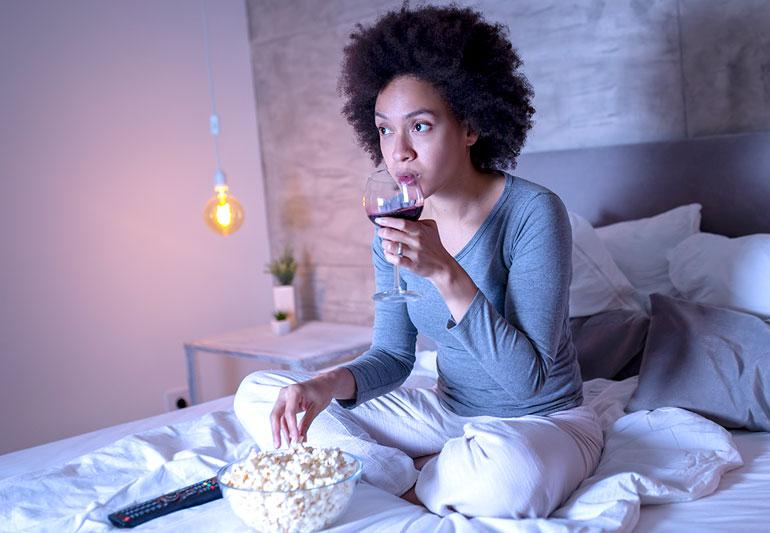 People who consume alcohol before going to bed are more likely to have sleep problems and wake up feeling drowsy the next day as a result of the interruptions that alcohol can cause to REM sleep. There is a danger that this can lead them into an endless loop where they self-medicate by drinking alcohol before bed, then drink to remain awake, and then self-medicate by drinking to fall asleep again.

Overindulging in a short period of time, which results in a blood alcohol concentration of 0.08 percent or above, might have a negative impact on the quality of one’s sleep. People who engage in binge drinking on a weekly basis are more likely to have difficulty falling and staying asleep, according to recent studies. Both sexes were affected by these findings. Adults of all ages showed the same tendencies, including teenagers and young adults.

Long-term alcohol abuse has been linked to chronic sleep disorders by researchers. In order to fall asleep, people who have developed an alcohol tolerance may need to drink more than usual before going to bed. Insomnia is frequently reported by those who have been diagnosed with alcohol use disorders.

Sleep apnea is a condition that causes irregular breathing and a brief lack of air while one is in bed. Sleep disturbances and poor sleep quality can also be caused by these respiratory pauses. Occurring in the back of the throat, obstructive sleep apnea (OSA) is caused by physical obstructions in the throat, while central sleep apnea (CSA) occurs when the brain cannot effectively communicate with the muscles that govern breathing.

The sleeper may make choking noises when experiencing an apneic breathing episode, which can happen at any time during the night. People who suffer from sleep apnea are also more likely to snore loudly and unpleasantly. Because alcohol relaxes the muscles in the throat, it may contribute to sleep apnea by making breathing more difficult. Snoring may get louder as a result of this, which can worsen the symptoms of OSA. Furthermore, even for those without a diagnosis of sleep apnea, a single serving of alcohol before bed can cause OSA and loud snoring.

There has been a good deal of investigation into the connection between sleep apnea and drinking. Sleep apnea is more likely to occur in people who drink alcohol than those who don’t, according to a wide range of research. 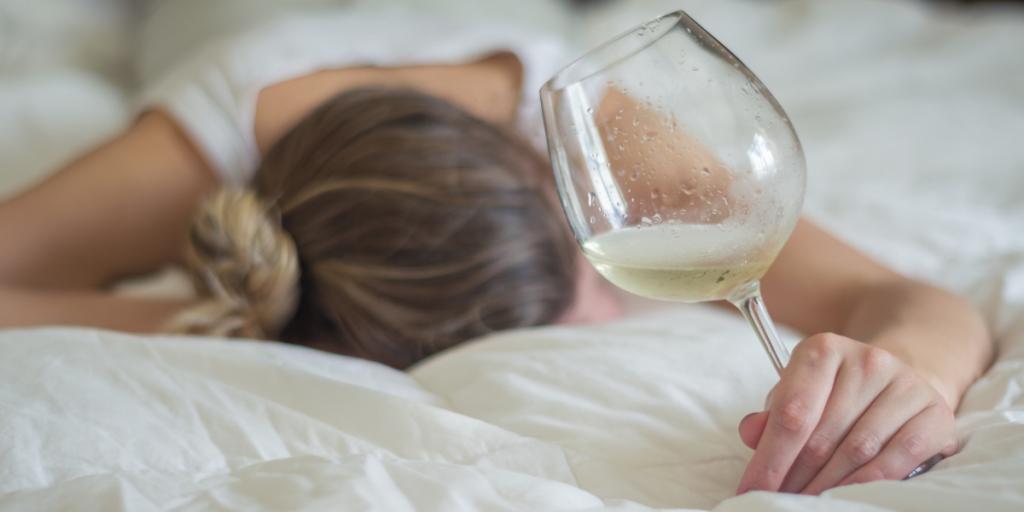 How to Drink & Sleep Responsibly

Does this suggest that you should stop drinking in order to have a decent night’s rest? Nope! However, there are several precautions you should take to guarantee that your drinking does not interfere with your sleep:

The asleep problems, like sleep apnea, may be to blame if you snore regardless of whether or not you’ve been drinking. This means that the person has short and frequent pauses in breathing during the night when they are diagnosed with sleep apnea Suffocating cessations prevent sufferers from getting the deep, restorative sleep they require since the body has to partially rouse itself repeatedly to reestablish adequate breathing. OSA, the most prevalent kind of sleep apnea, happens when the tissues in the mouth and throat relax and close up the airway while you’re asleep.

If you’re already suffering from obstructive sleep apnea or snoring, you may want to pay extra attention to your drinking habits before bedtime to ensure you’re getting the greatest possible sleep, especially if you consume a lot of alcohol. Sleep apnea is a serious medical disease that necessitates adequate treatment, therefore healthy drinking and sleeping habits alone won’t help. A dental appliance, which looks like a retainer or mouthguard and moves the jaw forward while you sleep to improve ventilation, is one therapeutic option.

Does Alcohol Help You Sleep?

As a result of its sedative effects, alcohol may help you fall asleep faster. People who drink before going to sleep are more likely to have problems sleeping later in the night because their liver enzymes are metabolizing the alcohol. Excessive daytime sleepiness and other problems the next day are possible outcomes. Drinking to sleep can also cause tolerance, requiring you to drink more each night to get the same sedative effects.

In general, women become intoxicated quicker and require smaller alcohol amounts than males. In part, this can be due to two things. Because women often weigh less than males and become intoxicated more quickly, this is a primary factor. In general, women’s bodies contain less water than men’s. Because alcohol is more easily absorbed by women’s bodies than by men’s, drinking the same amount of alcohol can result in higher blood alcohol concentrations in women than in males. 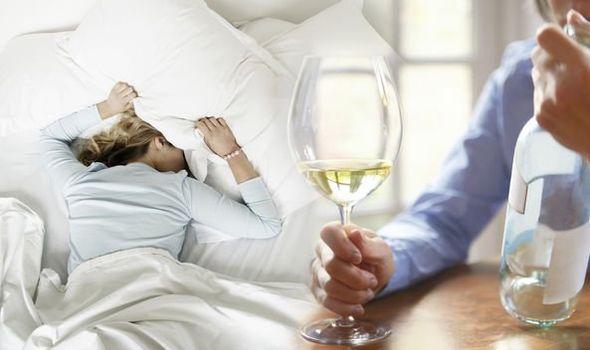 What Is the Difference Between Moderate Drinking and Heavy Drinking?

A single serving of alcohol is commonly defined as the following measurements, but this depends on the source.

Will a Small Amount of Alcohol Affect My Sleep?
If you’re drinking too much, you’re going to have a harder time falling and staying asleep. Even a modest amount of alcohol can have a negative impact on sleep quality for some people, although this depends on the individual.

In a 2018 study, sleep quality was compared amongst people who drank varying amounts of alcohol. This is what we found out:

When Should I Stop Drinking Prior To Bed To Minimize Sleep Disruption?

Stopping consuming alcohol at least four hours before going to bed will help you get a better night’s rest.