For the most part, people follow a 24-hour biological clock that is in sync with their body’s hormone production and the cycle of day and night. The circadian rhythm is a 24-hour cycle that plays a vital influence in our sleep cycle.

What Is Circadian Rhythm?

Different physiological functions require the circadian rhythm to function properly. Besides sleep, this rhythm regulates body temperature, feeding and gastrointestinal processes, and hormonal activity. The suprachiasmatic nucleus (SCN) is the brain’s primary circadian clock and is formed of a cluster of proteins (SCN). This clock “entrains” or resets every 24 hours in a healthy adult based on light and darkness cycles. It is natural for a healthy individual to become tired throughout the day, and this fatigue will peak in the evening as the sun sets. 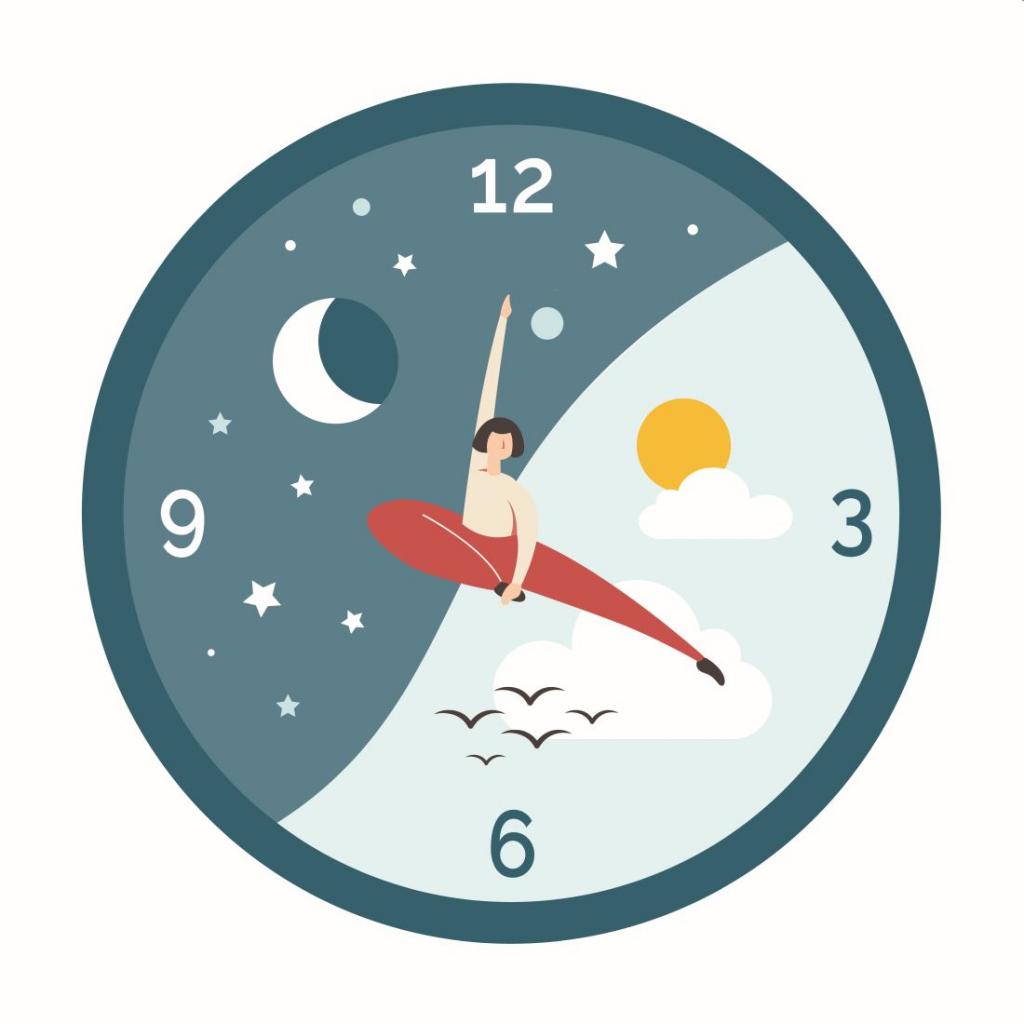 As a person ages, their sleep patterns vary and adapt. Because of this, teenagers tend to stay up later than adults and younger children. With age comes an earlier bedtime and an earlier up time.

What Is a Circadian Rhythm Sleep Disorder?

To put it simply, a circadian rhythm sleep-wake disorder (CRSWD) happens when the body’s internal timekeeping mechanism has been altered, the clock is incapable of entrainment nearly every 24 hours, or the clock and a person’s external environment are out of sync.

What Are the Symptoms of a Circadian Rhythm Sleep Disorder?

These illnesses have a wide range of symptoms, but all lead to excessive daytime sleepiness. Another typical complication of these diseases is insomnia — difficulty falling or staying asleep.

Specific criteria, such as the following, must be met before a circadian rhythm sleep-wake disorder can be officially diagnosed:

Circadian rhythm sleep disturbances, as shown by these criteria, can have serious consequences for one’s health, including difficulties at work or school and an increased risk of car or workplace accidents.

The following are examples of circadian rhythm sleep-wake disorders classified by the AASM:

Sleep-wake cycles that are more than two hours behind normal are said to have delayed sleep-wake phase disorder. People who have a delayed circadian rhythm may have difficulty winding down at night and waking up earlier in the morning as a result of these issues.

If you have early morning school or job commitments, you are more likely to have sleep deprivation as a result of this disease. 7 to 16 percent of young adults and adolescents have this illness, which is more common in evening chronotypes, or “night owls.”

In contrast, people with advanced sleep-wake phase disorder tend to fall asleep and wake up more than two hours earlier than they would prefer. This illness is more likely to strike someone who is older.

Symptoms of delayed or advanced sleep-wake phase disorder must persist for at least three months before a diagnosis may be made. In addition, kids must report an increase in their quality and duration of sleep if they are allowed to set their own bedtime and wake time (rather than a schedule dictated by work or other obligations).

Consistently disrupted sleep patterns are a hallmark of this illness, which is not linked to day/night cycles. It is possible to suffer from difficulty sleeping as well as excessive daytime sleepiness as a result of abnormal sleep periods. There is a high prevalence of neurodevelopmental or neurodegenerative disorders in patients with an irregular sleep-wake cycle problem. Children with developmental difficulties have also been shown to suffer from the disease.

This disease often results in short intervals of sleep lasting fewer than four hours. The upshot is that those with irregular sleep-wake cycle disorder commonly nap during the day. Alzheimer’s patients who experience sundowning, which is characterized by agitation, restlessness, or confusion at sunset, may be more susceptible to sleep fragmentation.

When the internal clock doesn’t reset every 24 hours, it’s known as non-24-hour sleep-wake rhythm disorder. Because of this, a person’s regular sleeping time shifts around the clock over the course of a few days or a few weeks. It’s not uncommon for the severity of a person’s symptoms to be influenced by their sleep routine and other commitments.

It is possible for sufferers with this ailment to suffer from insomnia and excessive daytime sleepiness if their sleep patterns do not match up with their social and professional lives. A person with this disease rarely, if ever, suffers from sleep disturbances when their schedule is in sync with their sleep cycles.

Blindness is the most common symptom of this condition. Due to the little amount of light a completely blind person can see, they are unable to tell the time of day. Their internal clock is often unable to synchronize with the 24-hour cycle, as a result of this. Experts estimate that half of all blind people suffer from a non-24-hour sleep-wake rhythm issue, which affects 50 to 80 percent of those who are blind. A patient must have symptoms for at least three months before a diagnosis may be made.

Shiftwork disorder, characterized by sleeplessness and excessive daytime sleepiness, affects those whose professions require them to work at night. It’s possible to have shift work disorder if you work late at night or early in the morning when you’re not on the standard 9 a.m. to 5 p.m. schedule. Shift work that alternates between day and night can also cause sleep deprivation and drowsiness during the day.

If you have shift work disorder, you should expect to lose between one and four hours of sleep per 24-hour period, and it can become increasingly difficult to acclimatize to work once your shift begins

Because of the increased risk of accidents at work or on the road in the early morning or late night hours caused by this illness, it can be extremely hazardous.

This disease can also lead to ulcers and the use of alcohol or other medications as a kind of self-medication in order to get enough rest. As much as 38 percent of shift workers are said to suffer from this disease. It affects people of all sexes and ethnicities equally.

After flying across multiple time zones, most people suffer from jet lag. Sleep disturbance and daytime exhaustion are symptoms of the transition period during which the person’s internal clock needs to be synchronized with the local time zone. One to two days following the journey, jet lag symptoms might last for up to a week or more.

If the plane traverses two or more time zones, it is more likely to suffer from jet lag on the eastbound side of the world than on the westbound side.

For many people, one day of adjustment is required for each time zone traversed; for others, the intensity of symptoms might vary greatly.

Jet lag is normally not a dangerous ailment, but it can lead to a downward spiral if people don’t adhere to proper sleep habits during this post-flight period. Insomnia and other more severe sleep disorders can develop if symptoms persist.

Many of the illnesses in this group have underlying causes.

Patients have symptoms similar to those of the other circadian rhythm sleep disorders listed above, such as insomnia and excessive daytime sleepiness, but they do not fit the diagnostic criteria.

For the most part, a doctor or sleep specialist is needed in these circumstances.

Disruption of sleep rhythms is the primary cause of circadian rhythm sleep disorders. Your “internal body clock” or the external environment (e.g., social and job responsibilities) may be out of sync, resulting in a disturbance in the timing and duration of your sleep. Work, school, and social interactions are all hampered as a result of the circadian incongruity.

Circadian rhythm sleep disorders can be triggered by:

Diagnosing problems of the circadian rhythm can be difficult, necessitating the assistance of a sleep specialist.

You will be asked to keep a sleep diary for one to two weeks by your healthcare professional, who will gather information about your sleep and work schedule history. In addition to narcolepsy, which commonly mimics delayed sleep phase disorder, other sleep and medical conditions will also be ruled out.

A wristwatch-like device (known as an actigraph) is typically used in conjunction with a sleep diary to record sleep and wake activities over a period of days or weeks. Sleep studies, both overnight and during the day, are sometimes necessary. The individual’s sleep pattern is taken into consideration when conducting a sleep study. A shift worker, for example, might have a “overnight” sleep study done during the day. Other relevant tests include measuring body temperature and melatonin levels.

Depending on the patient’s precise diagnosis, treatment for circadian rhythm sleep problems can vary. Sleep hygiene, a comfortable sleep environment, and an established sleep-wake routine are frequently emphasized in the majority of treatments. When it comes to entrainment, these factors are beneficial for those with certain conditions.

Melatonin supplements may be used to treat circadian rhythm sleep disorders. To produce sleepiness, these medications must be prescribed by a physician and used on a regular schedule. Taking melatonin at the right time of day can help you reset your circadian rhythm and entrainment pattern. Make sure you are healthy enough to take melatonin before taking it.

Timed light exposure during shifts can be beneficial for shift workers with shift work disorder. Napping before work and modest caffeine use throughout the shift can also help these patients. It is also possible to use coping tactics to stay awake throughout their shift and to sleep during the day. Avoiding bright light throughout the day, limiting exposure to bright light at work, and creating a conducive sleeping environment are just a few of these tactics. Melatonin supplements and hypnotics can be used as daytime sleep aids, but they will not rectify circadian misalignment and should not be used long-term.