A child with micrognathia is born with a smaller lower jaw than is typical. Feeding and respiration can be affected by the illness. OSA, a sleep disorder that affects energy levels and quality of life, maybe a result of breathing difficulties. People with micrognathia are more likely to suffer from obstructive sleep apnea (OSA) than the general population. Only 2% of children had severe OSA, compared to nearly 80% of those with micrognathia.

Micrognathia, or mandibular hypoplasia, is a disorder in which a person’s lower jaw is significantly smaller than the rest of their face, resulting in an overbite. The lower jaw is referred to as the mandible in the medical definition of micrognathia.

Aside from eating and breathing difficulties, sleep pauses (a sign of sleep apnea), hearing issues, and trouble sleeping, micrognathia has other symptoms. Children with micrognathia may struggle to eat, and 88% of them have snoring problems. People with micrognathia are also more likely to get gastroesophageal reflux disease (GERD).

When a youngster reaches puberty, it’s possible that micrognathia will go away on its own. Micrognathia, on the other hand, might cause problems for the child’s development while it is still there. It’s possible that the baby will have eating issues, their teeth won’t develop properly, and they’ll have trouble breathing when they sleep. 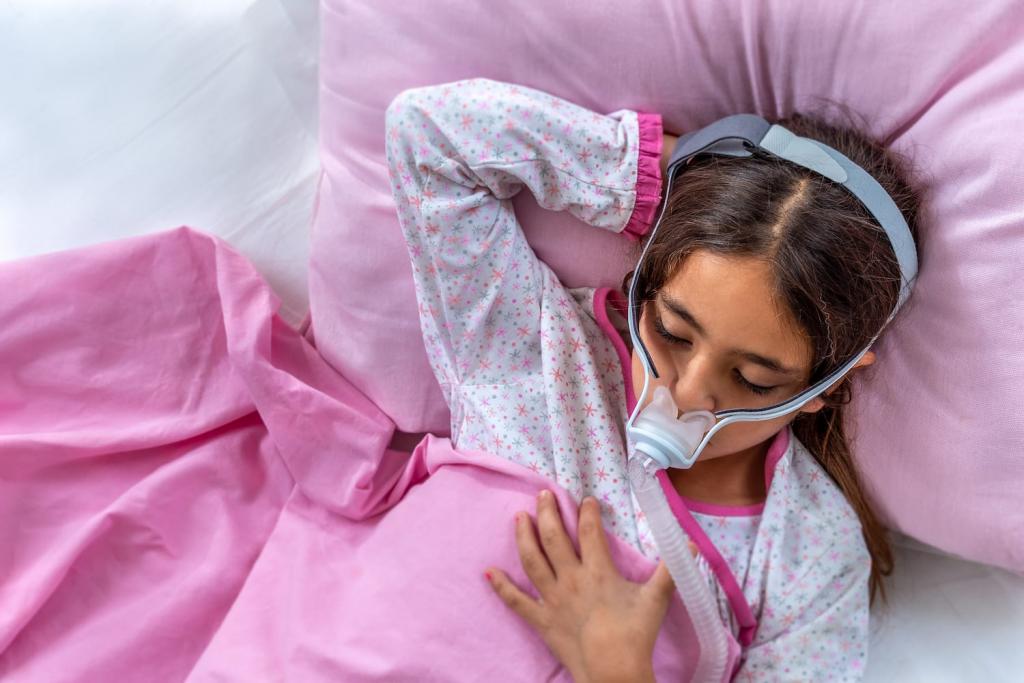 Occurring during sleep, OSA disrupts sleep and increases a person’s risk of cardiovascular, neurobehavioral and metabolic problems. OSA is a sleep apnea disorder characterized by snoring, gasping, or choking noises. No of how long an apneic episode lasts, a person’s sleep quality is compromised and can lead to signs of sleep deprivation such as fatigue, mood swings, and lack of concentration.

Pediatric OSA can lead to headaches, hyperactivity, and learning and behavioral issues due to sleep deprivation. OSA also causes a drop in blood oxygen saturation levels below 90%, which may have an effect on a child’s growth if they have it.

Obesity, swollen tonsils, or micrognathia can lead to OSA, which is a symptom of a medical ailment. The smaller lower jaw of a person with micrognathia causes the tongue to fall backward, obstructing the airway and leading to sleep apnea symptoms.

In the majority of cases, micrognathia is a congenital condition. Genetic mutations or inherited disorders that create facial deformities such as small lower jaws may be responsible for micrognathia.

How Is Micrognathia Diagnosed?

Micrognathia is almost always discovered in the first few months of a child’s life, if not earlier. The first trimester of pregnancy is the best time to have an ultrasound done in order to check for micrognathia.

Your pediatrician should be seen if you observe that your child’s jaw appears to be smaller than normal, or if they have difficulty eating or breathing. The misalignment of your child’s teeth may continue to cause difficulties in eating and speaking as they grow older. The symptoms of sleep apnea, such as trouble sleeping and hyperactivity or exhaustion during the day, maybe present in your child. During sleep, you may hear them choking, gasping, or snoring loudly.

A polysomnogram, or nightly sleep study, may be ordered by your doctor if your child shows indicators of sleep apnea. Your child will be put to sleep in a lab and have their breathing, brainwaves, oxygen levels in their blood, and heart rate monitored while they sleep.

When it comes to treating micrognathia, there are a variety of options. As the child’s jaw develops, it’s possible that micrognathia will go away on its own. As a result, some parents may delay treatment in order to see if the issue may be resolved without the need for intervention.

Treatment may be more urgent in cases when eating or respiratory issues are present, as well as teeth that are misaligned. In order to assist a child who is having difficulty eating, a doctor may suggest a variety of feeding positions. Both CPAP therapy and oral surgery have been shown successfully in treating breathing difficulties.

For the symptoms of obstructive sleep apnea, your doctor may suggest sleeping in a modified position or prescribing CPAP therapy. CPAP machines provide compressed air into the mouth through a face mask attached to the machine, keeping the airways open for the user.

CPAP therapy dramatically improved the symptoms of sleep apnea in a study of adolescents and young adults with micrognathia. If a person’s airways are restricted by swollen tissues while using CPAP, the therapy is less effective. The use of CPAP therapy may show the need for corrective surgery in some situations.

Depending on the degree and underlying cause of a person’s micrognathia, a doctor may suggest one of several types of oral surgery to open up the airways. Orthodontic braces or oral surgery can correct tooth misalignment. Mandibular distraction osteogenesis (MDO) surgery adds or removes bone to progressively expand the lower jaw, whereas tongue-lip adhesion can stretch the tongue’s base forward. These operations are often successful, although recovery takes time. Within a few months to a year and a half, feeding and breathing issues should be resolved. The effects of sleep apnea should also improve dramatically as a result of the procedure. As a result, patients report fewer apneic episodes and higher blood oxygen saturation levels.

Micrognathia has the best prognosis when detected early. The sooner a doctor is able to diagnose the issue, the better equipped he or she is to assess whether or not therapy is necessary.