Most children’s lives are now dominated by electronic devices. When it comes to academics, entertainment, and communication, kids rely heavily on screen-based devices. Despite the numerous educational and social advantages provided by modern technology, the ease with which we can now get our hands on these gadgets has its drawbacks as well. There is a concern about how technology affects sleep.

Children’s sleep quality has declined as a result of the widespread use of technology in daily life. Over half of teenagers and one-third of children do not get adequate sleep. There are a number of ways that electronic gadgets could alter the amount of sleep that children get at night. The more time we spend in front of devices at night, the less time we have to sleep, therefore having engaging content could help us sleep better. The blue light emitted by electronic devices is another means through which they may interfere with your sleep.

What Is Blue Light? 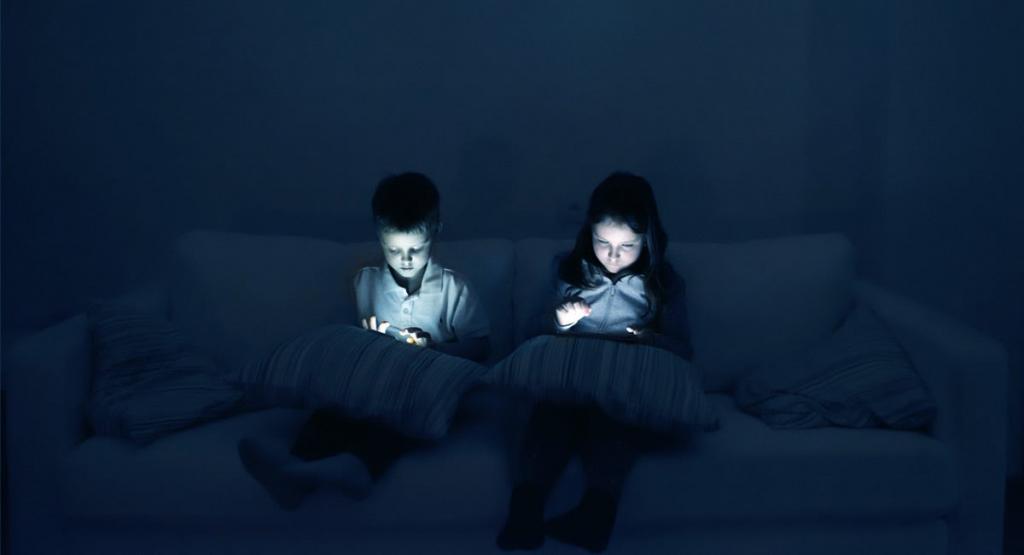 What Are Common Sources of Blue Light?

TVs, tablets, PCs and some e-readers all have screens that emit blue light artificially. As it turns out, we’re not only exposed to blue light from electronic devices. The sun is the primary source of our blue light exposure. In addition, LED and fluorescent light bulbs, which have become increasingly widespread in homes due to their energy efficiency, generate blue light. This light is harmful to the eyes and can lead to eye damage.

melatonin is a hormone that induces slumber, and blue light reduces melatonin production The rising and lowering of the sun helped humans develop a sleep-wake cycle that is based on the seasons. Melatonin levels are low throughout the day, rise in the evening after sunset, peak in the middle of the night, and gradually decline until the morning when we are solely exposed to natural light from the sun.

During the day, blue light from the sun or other sources can boost energy and focus. Studies have indicated that exposing yourself to blue light during the day can help you get a better night’s rest. As a result, our natural sleep-wake cycle is disrupted when we use devices that emit artificial blue light in the evening and at night. As a result, when it’s time to go to bed, we’re less rested than we should be.

A growing body of evidence shows that our children’s health is being harmed by their exposure to artificial blue light on a daily basis.

Taking a closer look at their health, let’s take a look at the following five areas:

Continuous blue light exposure, especially in the evening, confuses the brain and throws our internal clock off.

As the daylight dims in the evening, the brain secretes melatonin, a hormone that aids in sleep onset and maintenance. Because melatonin production is suppressed when exposed to high levels of blue light at night from artificial sources, the brain receives a message to stay awake.

Your child’s brain doesn’t know what time it is since they spend all day and night in front of screens and artificial light sources.

The melatonin-suppressing effects of bright light are especially noticeable to children. Melatonin levels in youngsters were found to be twice as low as in adults when exposed to the same level of light. While older children are less sensitive to melatonin suppression, younger youngsters are more susceptible.

There was a review of 36 papers in 2015 that looked at the association between sleep and the usage of digital devices in children and adolescents. It was discovered that people who utilized digital media devices before night slept less and slept less deeply. Sleep deprivation among adolescents has been on the rise since 2012, when cellphones and other portable displays became a necessity.

Screen use at night isn’t the only thing that interrupts sleep. In a study of Norwegian teenagers, researchers discovered that screen time both during the day and at night had an adverse influence on sleep.

When it comes to affecting children’s melatonin generation, blue light exposure at night has been shown to have detrimental effects. In several sectors, poor sleep quality and lack of sleep can have serious implications. It has been shown to be associated with decreased capacity for learning and low academic achievement. When it comes to your child’s capacity to succeed in school, inadequate sleep and exhaustion are a no-brainer.

However, the problem extends far beyond interrupted sleep. High levels of blue light exposure may be affecting your child’s brain development. 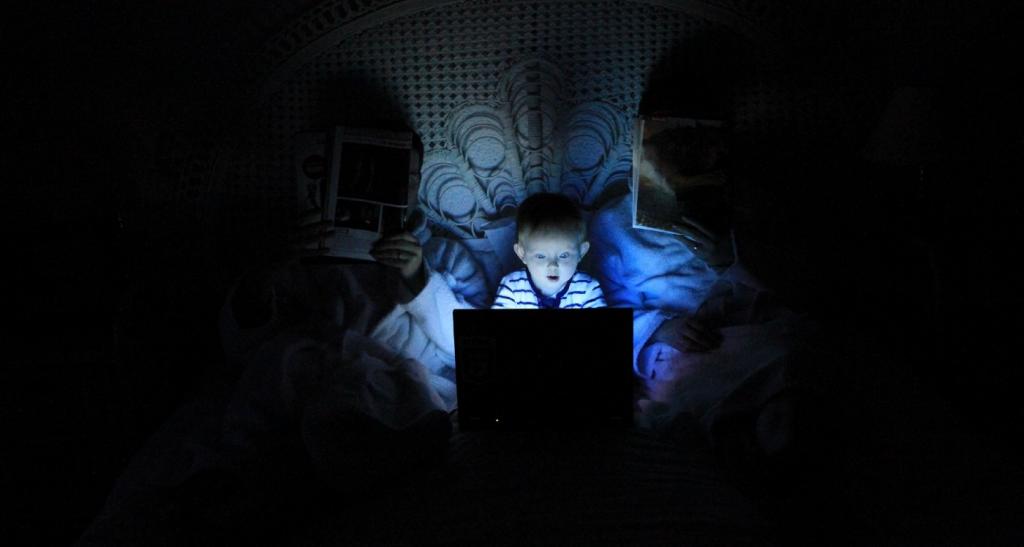 In the last ten years, the incidence of depression, anxiety, and suicide among children and adolescents have risen, which correlates with an increase in nighttime light exposure and an increase in the usage of blue light-emitting devices. Too much artificial blue light may be to fault if your child is easily irritated, unable to regulate his or her emotions, and lacking in motivation.

By disrupting the body’s natural rhythms and activating the brain, high levels of blue light exposure may be damaging children’s mental health.

When youngsters are exposed to blue light at night, it has a negative effect on their sleep patterns and their moods. When your child is worn out, it shows in their behavior and mental state.

Teenage suicidal conduct and poor mental health have been linked in numerous studies to late-night smartphone use.

Researchers observed that persons who were exposed to low blue light (approximately 5 lux) at night were more likely to suffer from depression than those who had no exposure to blue light at all. Children and teens are more sensitive to the effects of blue light, thus it is safe to presume that the risk of depression may be even greater in young individuals..

Do your children complain of headaches, blurred vision, or aching and tired eyes? If this is the case, excessive exposure to screens and bright lights may be to blame.

High amounts of blue light exposure pose a serious threat to eye health since it can penetrate deep into the eye and reach the retina.

As the eyes attempt to constantly refocusing, they are put under a lot of strain by the blue light from displays. Anecdotal and scientific data suggests that excessive screen use in youngsters causes eye strain. Burning, aching, and fatigued eyes, as well as headaches, impaired vision, and difficulty focusing are all symptoms of this.

Myopia, or nearsightedness, is on the rise among children who spend a lot of time in front of a computer screen, as well as those who use fluorescent desk lamps.

Children’s obesity and weight growth rates are increasing. Being overweight can have a negative impact on a person’s self-esteem, but it also serves as a warning sign for more serious health conditions, such as diabetes.

Could displays and LEDs emitting artificial blue light be a contributing factor?

And it’s not just a screen. Artificial light exposure in a child’s environment has been linked to an increase in BMI in a study of preschoolers in 2016.

As a result of persistent blue light exposure, poor sleep and shorter sleep durations in childhood have been linked to a higher BMI in adulthood.

This raises the possibility that children’s weight gain may continue into adulthood as a result of the negative effects of artificial light exposure. Even though we don’t know exactly how this affects sleep, exhaustion, and physical activity, we do know that increased blue light exposure and screen time is linked to these issues.

Using technology is so natural to children that it frequently feels like an extension of their own bodies.

So, how much blue light are children exposed to, and how much of it is harmful?

About 60% of children’s screen time is spent watching television, with over half of 12- to 13-year-olds owning a television in their bedroom, according to the 2015 “Growing Up in Australia” report.

There were even more disturbing findings from the Australian Child Health Poll in 2017. About a third of preschoolers, two-thirds of elementary schoolers, and nearly all high school students possessed a smartphone or tablet, according to the study’s findings In comparison to any other age group, teens spend the most time in front of a screen, whether it’s a television, computer, laptop, gaming device, smartphone, or tablet. They worked an average of over 44 hours a week, which works out to an average of six hours a day!

As a result, 86% agree to using screens to keep their children occupied while they are younger than six years old..

Does Blue Light Cause Sleep Issues in Children?

A number of studies have found that youngsters who spend a lot of time in front of a screen are more likely to be late to bed and to fall asleep more quickly. Many research in adults have shown that light exposure in the evening and the usage of blue light-emitting devices before bed have an influence on sleep, despite the fact that these observational studies cannot prove a cause-and-effect relationship. Evidence suggests that blue light’s sleep-disturbing effects may extend to children, especially given that children’s melatonin is more sensitive to light-induced suppression.

A greater amount of study, however, is required to determine if blue light disrupts sleep or if children who have trouble sleeping are more likely to use devices (and be exposed to blue light) before bed and at night already. It’s possible that sleep and screen time have a symbiotic relationship, with one affecting the other in the opposite direction.

Effects of Sleep Loss in Kids

Even while more research is needed to determine if nighttime blue light exposure affects children’s sleep, the critical role sleep plays in children’s functioning and development is well-documented. Inattention, impulsivity, and trouble self-regulating are all associated with sleep deprivation, according to studies. Sleep deprivation has been linked to lower academic performance in children. In certain sleep-deprived youngsters, the symptoms of attention deficit hyperactivity disorder (ADHD) might be mistaken for sleep loss, leading to a misdiagnosis.

Children’s muscular mass, immune system, and cell repair are all impacted by sleep deprivation, which is when certain hormones are released.

How Can You Reduce Exposure to Blue Light?

Children’s mental and physical health depend on receiving enough sleep at night, so making sure they get that sleep is a top priority for parents. There are a number of things you and your child may do if you are concerned about the impact blue light exposure is having on your child’s sleep. Begin by implementing the following measures:

If you’re dealing with an adolescent, it might be difficult to set rules and boundaries surrounding screen time. Encourage your teen to talk about the importance of sleep for his or her physical and mental well-being, and to be aware of the potential sleep-inducing effects of blue light. As a team, we could come up with guidelines for technology use. The role of parents and guardians is to model appropriate sleep habits, such as adhering to a technology curfew and storing electronic devices out of the bedroom.