Inconvenience and discomfort are well-known drawbacks of long-distance air travel. Extended aircraft travels can be exhausting for many individuals, due to the logistics of check-in, the stress of security lines, and the hours of sitting in the same place for so long.

Long-haul trips can be physically taxing because of the effects of jet lag. Jet lag is the result of your body’s internal clock being out of sync with the time zone that you’re traveling to. When flying over three or more time zones, this behavior is common.

It is possible to suffer from jet lag symptoms for days or even weeks following a long travel. For both work and pleasure, jet lag can have a severe impact.

Long-distance travel can be made more bearable and less detrimental to one’s health and well-being if one is aware of the symptoms, causes, and remedies for jet lag. 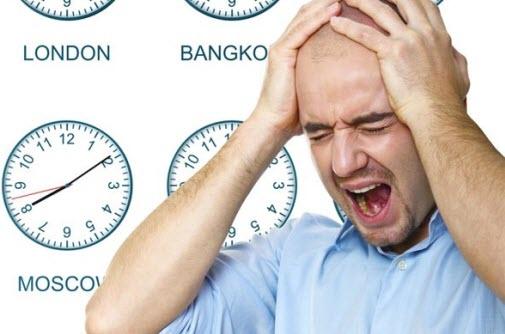 What Is Jet Lag?

When your 24-hour internal clock, known as your circadian rhythm, does not match the local day-night cycle, you get jet lag.

circadian rhythm is normally aligned with daylight, encouraging alertness and sleep at night in normal circumstances. In order to get a good night’s sleep and maintain good physical and mental health, this internal clock is set to match the 24-hour day. Because dawn and sunset occur at different times around the world, a person’s geographic location has an impact on their circadian rhythm.

People who travel across three or more time zones are more likely to suffer from jet lag than those who only cross one or two. Even if you arrive in New York at 8 p.m. after flying from Los Angeles, your body may still think it’s 5 p.m. in L.A. As a result of jet lag, you may have symptoms like as staying up later than you’d prefer, sleeping at unusual times, or simply feeling exhausted.

What Are the Symptoms of Jet Lag?

Disruption of your circadian rhythm causes these symptoms following long journeys to different time zones. Your body then creates hormones that alter sleep and other biological processes.

Those who suffer from jet lag exhibit one or more of the following symptoms. Symptoms may begin right away or take a few days to develop. Many people have a good night’s sleep on the first night after a flight, but then have trouble sleeping the next several nights.

There is a wide range of jet lag durations, ranging from a few days to many weeks. Symptoms might last anywhere from a few hours to a few days depending on the person and their travel itinerary.

Can Jet Lag Have Long-Term Consequences?

When the body’s circadian rhythm adjusts to the new time zone, jet lag normally goes gone within a few days. Many long-distance fliers, including pilots, flight attendant and business traveler suffer from jet lag on a regular basis.

Chronically disrupted circadian rhythms can lead to sleep disturbances and, eventually, insomnia. For example, diabetes, depression, and various cancers may be linked to persistent circadian rhythm disturbances, which can affect the body’s ability to maintain a healthy rhythm.

Jet lag occurs when a traveler travels three or more time zones in a short period of time. As additional time zones are traversed, the symptoms may become more severe.

Jet lag is more severe when going east than west, according to the vast majority of people. Due to the fact that delaying your internal clock is easier than advancing it, the effects of jet lag vary depending on the direction of travel. North-south aircraft do not experience jet lag because they do not travel through various time zones.

Jet lag isn’t a problem for everyone who takes a long-distance travel. Numerous variables affect whether or not you’ll suffer from jet lag.

It is difficult to predict who will get jet lag, how bad it will be, and how long it will continue because of so many variables. However, mild jet lag is normal when more than three time zones are traversed during a plane travel.

How is Jet Lag Different From Travel Fatigue?

A long day of travel might leave you exhausted, and that’s to be expected. Aside from the fact that it can be mistaken for jet lag, travel exhaustion is the most common cause of this. The physical strain of traveling can create a variety of unpleasant symptoms, such as exhaustion and headaches.

Dehydration and respiratory issues are common side effects of flying, thanks to the low humidity and low air pressure in airplane cabins. Bloating and leg swelling can occur as a result of changes in air pressure and prolonged sitting. In-flight interruptions make it impossible to sleep upright aboard an airline, making it tough to get a good night’s sleep when traveling.

Although exhaustion is common after a long travel, this is not the same as jet lag.

Travel tiredness does not impair circadian rhythms, unlike jet lag, which does. Therefore, while jet lag normally goes away after a full night’s sleep, travel tiredness might last for days or weeks until one’s internal clock is adjusted.

Both travel exhaustion and jet lag may be present following long-haul flights, although the effects of jet lag are likely to remain longer.

How can I prevent jet lag?

Jet lag can’t be prevented, therefore there is no guarantee that you won’t get it. However, there are several things you may do to lessen the effects of jet lag.

Start preparing for schedule changes before you travel

Slowly alter your eating habits in the days leading up to your trip so that you may take advantage of the local cuisine.

For a few days before to your departure, try to sleep and wake up later if you’re moving from east to west. You may assist your body adjust to new sleep patterns by going to bed and waking up earlier when you travel from west to east. 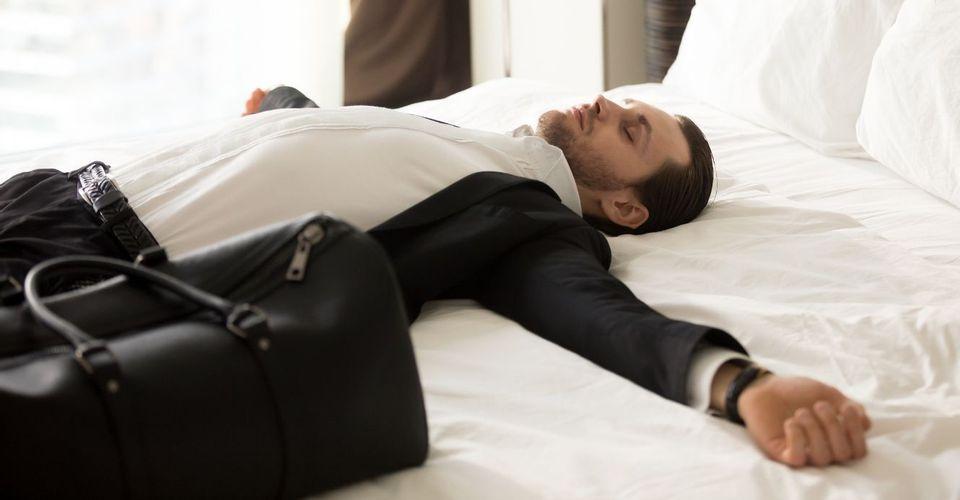 Move your body on the plane

Jet lag symptoms may be alleviated if you keep your body active throughout the travel. Avoid sitting in the same place for long periods of time if at all feasible.

While seated, you can also perform a variety of workouts. Try:

When will jet lag go away?

When it comes to jet lag, there are several variables that can affect how long it takes to get over it. The distance you’ve traveled, the rhythms of your body, and your overall health are all factors to consider. A few days after arriving at their destination, many travelers who have been suffering from jet lag report feeling better. It can take up to a week for some people to feel completely normal again.

When should I call the doctor?

Symptoms of jet lag that persist or worsen for more than a week following travel should be reported to your doctor.

If you notice any symptoms that aren’t likely to be caused by jet lag, you should contact your healthcare professional.

A note from Cleveland Clinic

Many people experience the effects of jet lag after traveling. If you’re flying lengthy distances (more than two-time zone changes), you may get jet lag. As your body adjusts to a new sleep-wake cycle in your new location, you may have mild to major sleep problems or other symptoms. When traveling, it is possible to avoid experiencing jet lag symptoms. You may lessen the effects of jet lag by preparing your body for the expected changes in routine and by making healthy choices while you’re on vacation.